Summer is over. Winter is coming. Around the Web is back. AI art, deep fakes, and David Attenborough.

Around the Web ends its summer break and returns to the regular programming. Whatever regular mean these days.

What a summer it has been. Crypto tanked, NFTs are dead. Italy (#girlboss) and Sweden elected right-wing governments . The coolest summer of the rest of our lives, yet marked by droughts and catastrophic floods. Cloudflare was forces to drop Kiwi Farms. Elon Musk still hasn’t bought Twitter, instead they now fight in court. As neither platform X nor billionaire Y can count me, I expect the case to be a bucket of popcorn. If the world ends, we might as well get diabetes.

To avoid the end of the world as we know it (sorry) the question to be asked, and collectively answered, is how to organise and do so fast to have any shot at a better future. Time’s running out. It’s probably time to stop being picky.

There’s always hope, and we better never forget this.

On a technical note: I finally added tweet and image support to the newsletter. Yay.

The summer has been dominated by generative AI, with images created by algorithms popping up everywhere. Questions of copyright remain, as well as the problem of datasets that scrape the internet without consent.

I have #stablediffusion batch generating street photographs taken in Paris.

It's a known effect that "signatures" appear in images, but here is an example of a specific one: It has learned the @GettyImages watermark!

Compare for example with this: www.gettyimages.ie/detail/news-photo/la-voiture-italienne-arbath-expos%C3%A9e-au-salon-de-lauto-%C3%A0-news-photo/1260060365 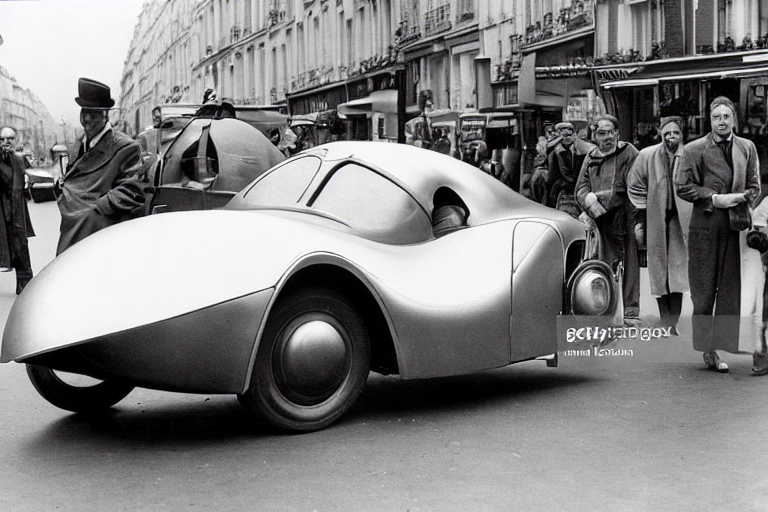 And of course, the question of what creativity is and how these algorithms will impact the future of work. Thorny problems, with no clear answer yet. Which – of course – won’t hold deter venture capitalists from pouring millions of dollars into the space.

On the intersection of men being toxic and AI: Men Are Creating AI Girlfriends and Then Verbally Abusing Them. I hope we have hit rock bottom with this, but I fear that not.

Human Touch is a great profile of women workers in India annotation datasets used to train AI models, the perspectives it gives and global economic dynamics.

India is one of the world’s largest markets for data annotation labour. As of 2021, there were roughly 70,000 people working in the field, which had a market size of an estimated $250 million, according to the IT industry body NASSCOM. Around 60 percent of the revenues came from the United States, while only 10 percent of the demand came from India.

For a brief news cycle, an engineer at Google made AI sentient. It has been inevitable. Luckily, this news cycle is over.

A researcher at Google’s DeepMind meanwhile published a paper which stated that AI might end humanity. Google wasn't amused.

As the climate crisis has the world in its grip, the pundits claiming technology will save the world are as loud as always. There is, however, no conclusive evidence that artificial intelligence will help to solve the crisis. On the contrary, it’s still unclear how to reduce the carbon footprint of training and operating these models. It certainly isn't helpful if your data center is using even more water than promised.

This interview with Timnit Gebru is a great read. No surprises there.

The real problem with deep fakes

One rogue field in which artificial intelligence is cause for concern are so-called deep fakes. The technology analyses past audio and video recordings of a person and renders new content based on it.

Amazon will offer to deep fake the voice of deceased relatives. The company touts this as a way to relive memories or have a ghostly voice read a good night story to your kids. While creepy, it makes sense. Most of the products, shaping the digital world, have a hard time coping with dead. After all, they are built to store the amassed data forever and ever, fading away does not fit in this concept.

If anyone at Amazon thought about the potential for misuse? I would rather not hear that the answer is «No».

Deep fakes are being used for illegal purposes already. A recurring target is Elon Musk. And because crypto has to play a part in every better scam today, it’s only logical to see Elon deep fakes shilling cryptocurrencies. But other companies are targeted by deep fakes as well.

As with every technology, it will get broader adapted as time goes on. And as with every baad thing on the internet, women will feel the brunt of it.

While Amazon’s latest product offering might not interest you and you are not interested in Ponzi economics, this means that sooner rather than later, you will be exposed to a deep fake, be it as a form of harassment or to sell you something.

Luckily, there are tell-tale signs of deep fakes, and it is possible to spot them.

The great thing about technology is that … ah, fuck it. On the Horizon: Interactive and Compositional Deepfakes. Yes:

Interactive deepfakes have the capability to impersonate people with realistic interactive behaviors, taking advantage of advances in multimodal interaction. Compositional deepfakes leverage synthetic content in larger disinformation plans that integrate sets of deepfakes over time with observed, expected, and engineered world events to create persuasive synthetic histories. Synthetic histories can be constructed manually but may one day be guided by adversarial generative explanation (AGE) techniques. In the absence of mitigations, interactive and compositional deepfakes threaten to move us closer to a post-epistemic world, where fact cannot be distinguished from fiction.

If you don’t feel like reading the paper, Davis Blalock has summarised it in a tweet thread.

"On the Horizon: Interactive and Compositional Deepfakes"

So you probably know that neural nets can generate videos of people saying stuff they never said. But Microsoft’s chief science officer articulates two threats beyond this that could be way worse: [1/11]

Is it me you are looking for?

No fake (hopefully): Europe edges closer to a ban on facial recognition.

The support from Renew, which joins the Greens and Socialists & Democrats groups in backing a ban, shows how a growing part of Europe's political leadership is in favor of restrictions on artificial intelligence that go far beyond anything in other technologically-advanced regions of the world including the U.S.

Vorratsdatenspeicherung, a German project to store internet connectivity data on all its citizens, has been declared illegal by the European Court of Justice. Again. German governments try to get different forms of this to pass for fifteen years now.

PimEye’s new CEO has been trying to improve the public image of his company, declaring his tool is not spyware but digital self-defence and the user is the problem. Yeah well no thanks.

Tesla is a surveillance company that builds cars.

The Internet at Large

YouTube still has a harassment problem. And their dislike buttons don’t work. What does work however: there is creepy content for kids.

Is TikTok boring yet? Probably. They remain on the top of the social media hill, though. For now.

Apropos of TikTok, the Food and Drug Administration in the USA tried to be modern, and instead promoted a not-so-viral not-really-challenge. If you want to read the non-alarmist history of the NyQuil chicken, Ryan Broderick has got you covered.

The internet shutdown in Tigray is nearing its second anniversary. The regime in Iran, too, reacted to the current uprising with shutting down the internet. Elon Musk pr’d to the rescue, announcing to «unlock» the access to Starlink’s internet in the country. It won’t help much.

In good people: David Attenborough holds a special place in many people’s heart, including mine. Rachel Riederer’s account of his work is therefore well worth a read: The Lost Art of Looking at Nature

Cheating. It has been a while since I’ve been exposed to it – I don’t play video games anymore and have left school a while ago. Still, cheating is alive and well, as Matt Crump details in his post My students cheated … A lot.

Ever wondered how to draw a crab? Wonder no more.

Let’s see what the winter brings. Stay sane, hug your friends, and shut down fossil infrastructure.